It is foolhardy to make a second trade, if your first trade shows you a loss. Never average losses. Let this thought be written indelibly upon your mind. - Jesse Livermore, Reminiscences of a Stock Operator

Risk mitigation should be at the forefront of every traders mind as it will be a contributing factor in your success or failure in the Forex market.  If you're like many traders who think that they're bound to hit a win after a string of losing trades, then you're heading for a premature end.

The desire to win came sometimes cloud even the sanest of judgments and can cause financial ruin in some cases. Just ask Nick Leeson who famously who brought about the collapse of Barrings Bank in 1995. He, like many traders, didn't no when to cut his losses and just kept doubling up and trying again in the vein hope that the next trade would be a winner. It wasn't and he ended up losing billions and ultimately serving time in prison for his crimes. In these situations it's wise to focus on calming internal frustrations and not focusing on the losses too much. Focusing on any one trade in isolation is never a good thing... unless it's a big winner, in which case feel free to pat yourself on the back and have a drink or two!

Why Focusing on Position Sizing is Important

When you start trading with a relatively fixed account balance, you must focus very closely on position sizing. People often use the phrase 'cutting your losses short and letting your winners ride', but those same traders don't often follow their own advice. They often add to losing trades thinking that the trend will definitely change soon or before their account blows up. More often than not though these traders have miscalculated and end up going bust.

If you were to look at some of the Worlds most successful traders you would see that many of them have certain traits in common. In the famous book, 'Market Wizards' by Jack Schwager there are a few notable quotes on the subject of risk mitigation.

Here's a few of my favorites...

"You have to minimize your losses and try to preserve capital for those very few instances where you can make a lot in a very short period of time. What you can’t afford to do is throw away your capital on suboptimal trades."-- Richard Dennis

In the same book Dr. Van K. Tharp talks about the need to reduce risk and controlling the mental aspect of trading. Those are just a few examples of the need to monitor your position size and to not let your emotions get the better of you. It's an important skill to have as a trader and is something that will ensure your career as a trader is a long and successful one.

A recent study of over 12,000,000 live traders found that position sizing and proper trade management was a major contributing factor to their success.

These are basically two sides of the same coin and are used often by some traders. One of the techniques is utilized by many losing traders while the other by the most successful.

With a martingale approach a trader would 'double down' on a losing trade and place twice as many lots as he had on the previous trade. The hope is that one small move in their favor will recoup the losses that they have previously made. The problem with this approach is that it sometimes works... right up until the point that it doesn't! When it doesn't work out as you would want and the price continues to move against you, it can soon end in disaster. This is just one of the many hazards that can be found in the Forex market.

The opposite style of trading is what's called the 'anti-martingale' approach. Here a trader will only consider adding to winning positions and would never think about adding to a loser. It's the style most favored by the successful traders and fund managers.

These types of traders are actually following the ideal of 'cutting your losses short and letting your winners ride'... which, as we've already said, is the ideal method to adopt.

Here's a chart that shows you how a Martingale approach to trading might look. 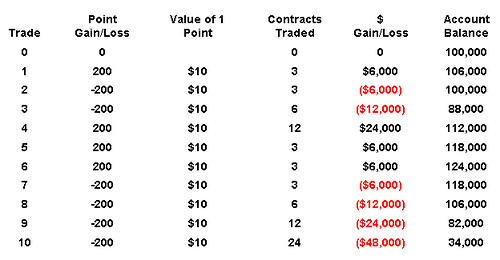 You can see quite clearly how a string of losing trades can quickly add up and reduce your trading account considerably. In the example chart above the trader would not be able to recoup his losses without first adding additional funds to his account. That would just be compounding the mistake he made in the first place and would be financial suicide.

Markets are only trending about 20% of the time so it's easy to see how many traders get seduced into using a Martingale approach. Since most of the time the market is ranging it looks like a pretty safe bet. But all you have to do is to take a look at any currency chart and scroll back a little bit. Look for a strong trend that goes on for days, weeks or in some cases, months! Imagine if you were in a trade in the wrong direction, thinking that the trend would end soon, and it never did. You can see how quickly you could blow your account.

Adding to your losses can be a winning proposition in the short-term but as we've illustrated above, it will ultimately end in disaster. A much smarter approach would be to adopt an Anti-martingale style of trading and only add to winning positions. If you're really serious about risk mitigation then it really is the only sensible thing to do. Successful traders have been utilizing it for many years so why would you want to challenge them? Like anything in life that you want to improve at you should be looking at those people who have already achieved success, and try to emulate them.

Good luck with your trading and be safe out there!

Strategy Tester And Expert AdvisorsAutomated Trading Software Can Be Hazardous